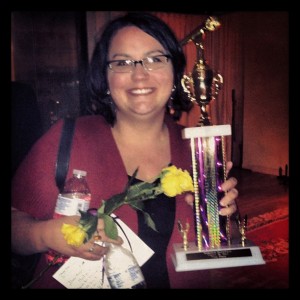 Our Spring 2012 StorySlam was held at the Vintage Theater. Our theme for the night was “Warning Signs.” Wow, did our storytellers deliver! This night was the first of its kind in NEPA. Story slam events are sweeping the country and now they have proven to be a hit in Scranton.

Our Master of Ceremonies for the evening was Conor McGuigan. We were uniquely privileged to have some of the Electric City’s most interesting characters in our premiere evening’s lineup of storytellers. Everyone was treated to both laughs and moving personal revelations by these writers, actors, and performers:

Although the competition was fierce, the judges performed their duties admirably. In the end, it was Amye Archer who walked away with the prize package, which included The Slammy, our trophy, a gift certificate to Library Express, and the honor of being our first ever winner!

We are especially grateful to Maureen McGuigan, Deputy Director of Arts and Culture for Lackawanna County, for acting as mentor on this Senior Project for Abington Heights Junior Madeline Zoe McNichols and for all she did to help make the dream of a story slam in Scranton a reality.

In addition to the storytellers, judges, and Master of Ceremonies, special thanks goes to the following people and organizations that helped bring this project to life.

We are proud to have been able to donate the net proceeds from this event to the Vintage Theater Project. 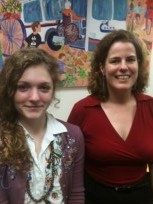 Zoe & Maureen, without whose help this could not be possible.

Conor O’Brien and Theresa O’Connor of the Vintage Theater

Julie Schumacher Cohen, Director of Community Relations
at the University of Scranton