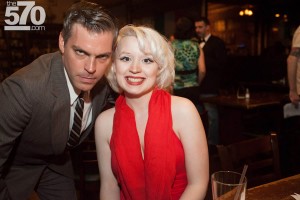 Master of Ceremonies Conor McGuigan and Hostess Tina Imel at the June 2012 StorySlam. Photo by Tom Bonomo. Courtesy of the570.com.

The Scranton StorySlam features some of the Electric City’s most colorful characters in a head to head storytelling competition. Storytellers each have five minutes to tell a true story from memory, in the tradition of old-fashioned storytelling. To tie the night together every storyslam has a unique theme. The themes are intentionally general, allowing the storytellers to take the audience in any direction, from pants-peeing hilarity to soul-wrenching heartbreak. It is called a “slam” because it is presented in the form of a competition, which results in a high energy and engaging environment. At the end of the night, the winner goes home with fifty bucks and a Slammy, the prestigious StorySlam award.

We’re thrilled to announce that the Scranton StorySlam was voted “Best New Event” for 2012 by readers of Electric City, a popular local entertainment weekly. 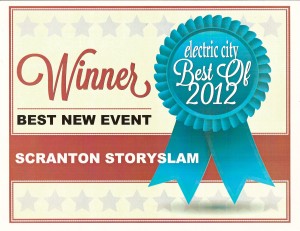 If you like This American Life, Radiolab, or poetry slams, you will definitely like this event. If that description didn’t get you, let me pitch it to you this way: think of the most exciting, funny, or touching stories your friends have ever told you. That is what [a storyslam] is.
— Yelp Review of a Well-known Established StorySlam

The StorySlam was also the recipient of a 2013 Lackawanna County Arts & Culture Grant!