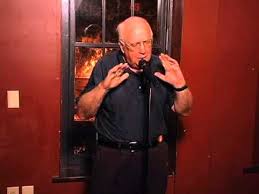 Dennis Boyne has led two lives for the past thirty years. On the corporate side, Dennis is a former District Manager for AT&T and is presently a consultant in computer applications for Legacy Solutions. He serves on two boards, Public Policy for the Greater Lehigh Valley Chamber of Commerce and ProJeCt of Easton. He is a former board member of the Chamber’s Small Business Council and WDIY radio.

Dennis’ second life is one of show business and entertainment. He is the past artistic director of Philemon Productions in New Jersey and was part owner and Creative Consultant for New Jersey Public Theater in Cranford, NJ. He has acted, produced or directed over seventy productions. He won the New York Daily News Drama Critic Award, New Jersey Edition for his portrayal of Marat in the play Marat/Sade.

Lately Dennis was a member of the improv group Improvolution in New York and has studied Storytelling with John Flynn of Upright Citizens Brigade also in New York. He continues to work with improvisation groups and storyslams. He has appeared in Scranton Storyslam and West Chester Storyslam as well as the storyslam at the Gotham nightclub in New York.

Dennis has written plays including Spirit, Christmas Eve, Advent and The Key to the Sword and Stone. He is presently in the process of writing his first children’s story called Jake at Church.

Dennis lives with his wife Nancy in Easton, Pa and Elk Mountain.

Dennis told the winning story at the Slam in the Summit!

Hear the story Dennis shared at “Storytime for Adults” at the Gathering Place in Clarks Summit as part of the 2015 Ice Festival.