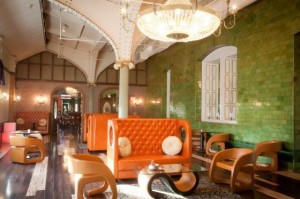 The Platform Lounge at the Radisson Lackawanna Station Hotel

The fall 2012 storyslam took place on Friday, November 23, 2012, at the Radisson Lackawanna Station Hotel on Lackawanna Avenue in Scranton. The theme of the event this round was “Game Changers: An Evening of Life Altering Moments.”

The following cast of characters duked it out at the Game Changers event:

In addition, two wild cards, who put their name in the hat, were selected to tell a story. Stephanie Douglass told a hilarious story about helping her friend out of a tight situation involving a Diva Cup, while Mike Manzano took home the Slammy for his story of a family friend who unknowingly saved the life of a young Fidel Castro. Same rules applied: five minutes – all true – no notes.

Master of Ceremonies Conor McGuigan was dashing in his burgundy velvet smoking jacket. Hear his story about a spine-tingling and slightly creepy childhood experience in a Fun House in Niagara Falls. His story begins, “One time my parents left me alone for four hours in Niagara Falls when I was twelve years old, with twenty dollars…” You know you want to hear more!