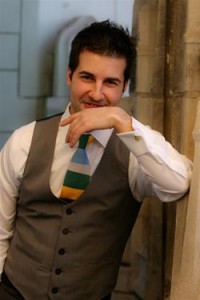 Tony Bartocci (Bar-toe-chee), aka “Mr. Manly” on KRZ, was born and raised in West Side. He attended Bishop O’Hara High School in Dunmore (when it was still called that) and received a degree in Information Technology and Integrated Media from Syracuse University, Syracuse NY.

Tony says he was raised on the radio/broadcast industry. Starting at age 15, his mother literally was dropping him off at the station (Entercom) to help with promotions and concerts. He later trained to be part time on-air and eventually landed a full time position on the Froggy 101 morning show as “T-Bone”. He co-hosted the show throughout his years in NY (the power of radio) and when he returned, assumed the Promotion Director position. He shifted around to many parts of the building, moving up the ranks, and is now Director of Strategic Sales & Marketing and oversees all promotions, events, interactive and marketing for the Entercom 4-station cluster (98.5KRZ, Froggy 101, 102.3 The Mountain and WILK Newsradio). He is also host of a Hollywood gossip segment on KRZ with Jeff Walker each afternoon at 5:15 as “Mr. Manly”.

Tony received the “Best Son” Award from his mother and most recently was honored as one of the 40 Under 40 by the Times Leader. He was also Dancing with the NEPA Stars 2011 Champion.

His current love is all related to the restoration of houses in the area. He is learning a ton about construction and applying it to many projects. Tony plays recreation-league football, dodgeball, and kickball. He loves learning about new emerging technologies and how they can be applied to enhance our surroundings.