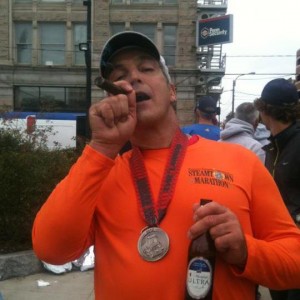 Pat McNichols is a life long west-sider who is always up for a challenge. In the past three years he has competed in a bodybuilding contest, the Tough Mudder competition, and twice completed the Steamtown Marathon. The Tough Mudder is billed as, “not your average lame-ass mud run or spirit-crushing ‘endurance’ road race. It’s Ironman meets Burning Man,” and claims it is, “probably the toughest event on the planet.” In addition to having a career in construction and a gig as an artists’ model, Pat is an actor who has performed both in local theater and in a movie by filmmaker Jamie Sutor. He most recently took to the stage in September at the 2nd annual Jason Miller Playwright’s Project Invitational, Dyonisia ‘12, where he appeared in Kait Burrier’s play Patient/Fracture.

Pat’s favorite role is as husband and father. He has been married for thirty-three years to the love of his life Maureen Welby McNichols, with whom he raised son Michael, and daughter Kaleena.