The Big Gay StorySlam is back! Now BIGGER (and gayer)! You won’t want to miss it.

Have you heard the news? The Scranton StorySlam is now under the umbrella of the Scranton Fringe Festival! 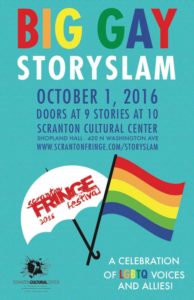 The Scranton StorySlam is now under the umbrella of the Scranton Fringe Festival, and with their powers combined the Big Gay StorySlam is sure to be bigger, gayer, and more fun than ever before!

This event is a celebration of the vibrant and diverse voices of the LGBTQ Community and allies. Storytellers will each share a true, personal story inspired by the theme “Ch-Ch-Changes.” The theme, a nod to the beloved androgynous pop star David Bowie who passed away earlier this year, is intended to inspire stories of transformation.

Starring Estella Sweet as our Mistress of Ceremonies!

Event is Rated “R” for possible mature themes in the live, unscripted and uncensored nature of the StorySlam.

The Scranton StorySlam was voted “Best New Event” in 2012 and the Scranton Fringe Festival won the same award from the Electric City in 2015! You won’t want to miss it!

The Scranton StorySlam is a unique storytelling competition at which ten storytellers each share a true, five-minute, personal story inspired by the theme. Themes are always general, allowing the storytellers to take the audience in any direction, from pants-peeing hilarity to soul-wrenching heartbreak.

While storyslams are becoming popular around the country and around the world, the Scranton StorySlam is the first of its kind in our area. The event meets at the crossroads of theater, performance, writing, memoir, and documentary art.

Interested in sharing your story? Throw your name in the hat and caution to the wind. Two “wild card” storytellers will be invited to tell their story during the course of the evening. Same rules apply: FIVE MINUTES-ALL TRUE-NO NOTES.

The victor takes home fifty bucks and a Slammy, the prestigious StorySlam trophy.

Adult storytellers give us a glimpse into their most awkward stage through the sharing of their teen diaries, journals, photos, and home movies!

If you would like to be a featured storyteller at an upcoming slam or to be notified by email of upcoming events, please contact us using the form below. We’ll be in touch!

We look forward to seeing you!