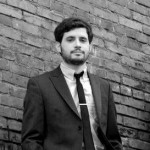 Timothy McDermott has been acting up since he was a little child and now he enjoys doing it in front of rooms full of strangers. He has performed in such productions as The Mistakes Madeline Made, The Glass Menagerie, Rainbow Crow, and Who’s Afraid of Virginia Woolf? His desire to be the center of attention is not limited to just acting; he writes stories, sings songs for The Push, makes short films, and helps create local and national television commercials and web videos with TwentyFiveEight Productions. When he’s not being loud, Tim enjoys things like sleeping, napping, and dozing off.