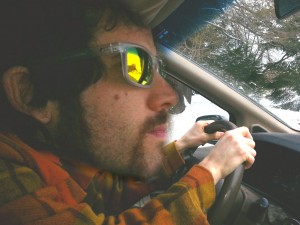 Mr. Derek Frey Williams wonders whether or not male squirrels go by “mister” like human men do. He works during most daylight hours as a cartographer in Honesdale, Pennsylvania, which doubles as his home. He enjoys engaging with the community and facilitating additional engagements whenever possible. Most intimately and presently, these enjoyments manifest through the Space Three and Canaltown projects (including the Canaltown Short Spooky Movie Festival) in Honesdale’s downtown, and supporting living space renovations at 552 Main Street. Derek once deeply cut his shin on a trailer hitch while crossing the street to Duffy’s Coffee House but has told others the accident occurred while popping his first wheelie. Mr. Williams first attended StorySlam for the “Road Trip” slam, at Honeychilds in Dunmore, with Alicia Anderson. If asked to play it cool, they’d say it was “pretty good” but they actually loved it.