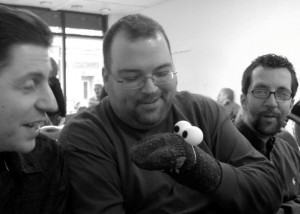 Patrick Martin is a founding member of one of the best comedy troupes in Scranton, PA, Here We Are In Spain. He also enjoys cheeseburgers.

While he was a youth, his mother and father, John and Sharon, taught him things no one under 15 should ever know but have yet to tell him where babies come from.

While he was at Scranton High School he was the prized student of Mr. Jack McGuigan, a creative writing instructor and half of the team that brought you Conor McGuigan among other things.

In his spare time, Patrick enjoys reading the Bible, writing sketches, having carrots and biking with the elderly.

Patrick dedicates tonight’s story to the three most important people who he has ever known: Katherine Layland, John Adams and Pete Townshend.

He’d also like to mention he has done good work in the producing and directing of two children, Landon Patrick and Kendall Margaret.

At the Slam in the Summit, Pat shared a hilarious tale about being a “weirdo magnet.”

Pat hosted “Storytime for Grown-ups” at the Gathering Place in Clarks Summit as part of the Ice Festival, February 2015.