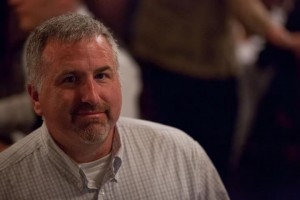 Jim Breslin is a writer, publisher, storyteller and producer. In 2009, he founded the West Chester Story Slam, a popular and often rowdy monthly live storytelling event. In January, 2013, he also launched the Delco Story Slam. The best three stories from both slams are available on monthly podcasts. Jim’s fiction has appeared in Metazen, The Molotov Cocktail and Think Journal. His non-fiction has appeared in WHYY’s NewsWorks, Main Line Today, The World According to Twitter and other publications. His first book, Elephant: Short Stories and Flash Fiction, was published in 2010. Jim spent seventeen years as a producer at the home shopping network QVC, and is working on short story collection based at a fictional home shopping network. He lives in West Chester, PA.