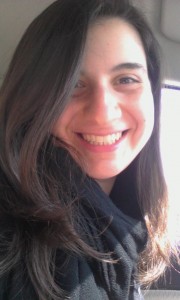 After graduating from an all-girls Catholic high school in New York, Ashley continued her education at the University of Scranton, graduating in 2009 with a B.A. in English. She double-majored in communication with a track in journalism and tacked on a women’s studies concentration — you know, for good measure, and also, because vaginas rock. ({})

She interned for the former Scranton/Wilkes-Barre Yankees’ public relations department, writing feature stories about players and gamers after each contest, as well as acting as a wrangler for players and mascots alike. (Ask her how sweaty CHAMP can get. She knows.)

In July 2009, Ashley landed a gig as an obituaries clerk for the Times-Tribune, where, daily, tales of deceased persons throughout NEPA crossed her desk. (Her favorite name: Clifford W. Tinklepaugh. The best.) When a spot opened in the sports department in December of that year, she applied and kick-started her sports writing career covering high school wrestling — now probably her favorite sport to cover, with soccer a majorly close second, even tied for first, geez.

In her spare time, Ashley enjoys trying to conquer ridiculously long books — this will be the summer to end all Infinite Summers, she swears — and writing short stories, creative nonfiction and poetry. She can often be found singing while washing dishes or taking a dance break — call it side effects of high school and summer stock theater — in her apartment in South Side where she lives with her partner, Steve. Aspirations include, but are not limited to, publishing a novel or two and opening a bookstore someday.