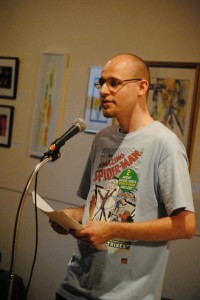 An avid blogger, Rich Howells graduated from Marywood University with a B.A. in English in 2007 with dreams of being a creative writer, but he found out quickly that short stories didn’t pay the bills. True stories did, however; he got his start in journalism at The Abington Journal as a freelancer and was eventually hired as the staff writer for Go Lackawanna, where he served for over two years and earned three Keystone Press Awards and two Weekender Readers’ Choice Awards in that time, falling in love with the profession in the process. He joined The Weekender as a staff writer in August of 2012 and was promoted to editor two months later. When he’s not attending concerts or comic book conventions, Rich continues to write and blog for pleasure, perform at poetry readings, and shoot photos seemingly everywhere he goes.