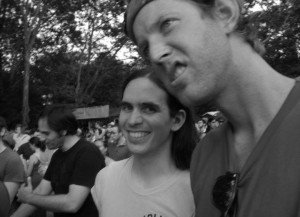 James Gidosh has been skateboarding for 25 of his 35 years. Currently living in Wilkes Barre, PA, he is the head of the NEPA Skatepark Alliance. James enjoys buying, selling, and collecting vintage clothing.

Check out excerpts of James’ interview with Christopher Hughes of the Times Leader regarding the Sidewalk Surfing exhibit at the Everhart Museum:

Locally, collector and NEPA Skatepark Alliance leader James Gidosh donated about 25 of the more than 200 vintage skateboards he’s collected during the past 15 years. He still recalls how he was first drawn to the sport.

“I saw a neighbor doing a handstand down the street skateboarding and said, ‘I’d like to do something like that,’ ” Gidosh said.

In the past decade, Gidosh has tried working with several municipalities in the Wyoming Valley to build a free, public skate park. Efforts in Wilkes-Barre and Nanticoke have stalled, but the group continues to pursue new avenues. Meanwhile, he’s added to a rare collection.

“I have a passion for collecting the older, earlier-style boards, ones that have the graphics on the bottom from when skateboarding really started to take off,” Gidosh, 35, of Wilkes-Barre, said. “I find all kinds of different boards — ones with the metal roller-skate wheels, clay-style wheels and even the ones that are really primitive, the homemade ones.

“They’re rare and hard to come by. Long ago, the whole idea of a skateboard was to ride it, and you rode it until it was really, really beat up. It’s nice to see some of them are still around with that original artwork on it.” – Times Leader