Rabbi Daniel Swartz is the spiritual leader of Temple Hesed, Scranton’s first Jewish congregation, where he is in his 10th year.  Prior to coming to Northeastern PA, he served in a number of social justice positions, including 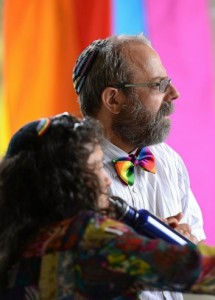 with the National Religious Partnership for the Environment and with the Religious Action Center for Reform Judaism, one of the leading faith-based advocacy groups on issues ranging from LGBT equality to fighting poverty.  He has been a strong ally for the LGBT community in NEPA, advocating with elected officials, writing op-eds and speaking throughout Lackawanna County, and performing some of the first same-sex weddings in our region.  He was awarded the Rainbow Award by GayNEPA in 2012, and he serves as a faith leader for Equality PA.  His journey to becoming a clergy advocate for LGBT equality started somewhat by accident, however, as you will hear in his story.